Most Of Big Shipping Countries Reflected Their Trade -->

Most Of Big Shipping Countries Reflected Their Trade

However, it is also well known that patterns of trade are different from one to another country. The types of commodities that are traded today differ from the commodities that were traded ten years ago. Trade of services has increased and the trading partners have changed. Only the one who can adapt well shall survive and placed as a winner.

As the shipping world in every country reflected by the growth of its trade, where is the place the Indonesian shipping industry targeted to be ?

There are 4 types of big shipping nation in the world:

- Country whose open their Flag for foreign investment,  so called Flag Of Convenience. They are: Panama,  Liberia,  Cyprus,  Marshall Island, Bahama, Malta etc

- Country who has Big and Sophisticated Ports and having Integrated Transportation System so becomes Transit ports such as Singapore and The Netherlands. 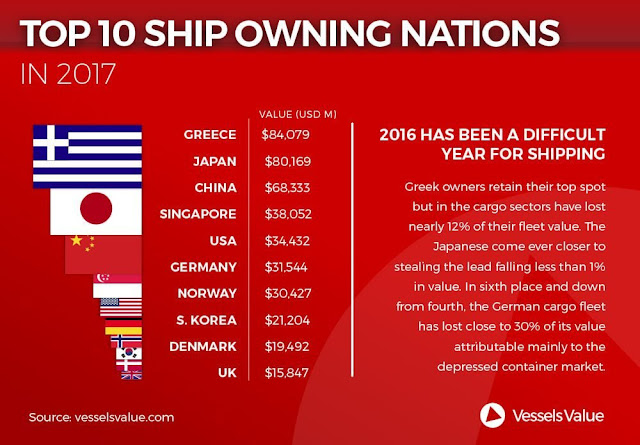 Indonesia who has a total Coal export in 2017 as much as 370 million tons, might have seen an opportunity in sea transportation sector. But the segment secured by national shipping company in coal transportation today, is just as far as transhipment from coal mine to mother vessel anchored nearby.

The decree of Ministry of Trade no. 82/ 2017 that clearly stated the use of Indonesian Fleet vessel for export/ import certain goods,  will be in force starting from April 2018.

Indonesian shipping industry, who had been overshadowed by foreign flagged vessel for decades, only occupied 4-5 percent of export and import cargo. And most of ship owners believed the Ministrial Decree no. 82 is a jump start for shipping industry despite pile of handicaps to have it realized.

Leaving our export in the hands of foreign shipping company, is exposed in case of global downturn. This might negatively impact our National economic, as well as employment in that industry,  Hanjin case has awaken everyone, even the giant can stumble and break apart.

We have to be master of our own destiny in term of our transport seaborne links. A nation who export big amount of cargo, logically rule the shipping company to carry it. As expressed historically, Development in trade is mirrored in the development in international sea transport. It is now the Ministry of Transportation to play a bigger role in the success of Government program of Tol Laut and World Maritime Axis. (zah)