Grounded Ship, What You Should Know as a Master? -->

Grounded Ship, What You Should Know as a Master? 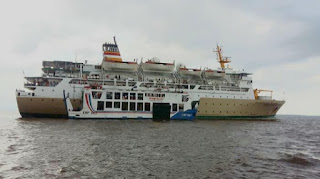 When a vessel is stranded, it is outside its natural environment, and the objective must be to re float as soon as possible. Prompt re floating of a grounded ship will reduce the stresses on the hull and exposure to the effects of rising ands falling tides and any possible deterioration in the weather, also oil will be less likely to leak from a ruptured tank when the ship is afloat, as she will lie deeper in the water.

On the other hand, if the ship is badly damaged re floating may be inadvisable due to the risk of further damage and possible loss of ship and increased pollution. Thus as advised in the stranding unit avoid taking any hasty action, a premature attempt to re float could easily worsen the situation.

Most re floating operations cannot be carried out instantaneously, and they sometimes take considerable time to arrange. (e.g.) repairs may have to be carried out to enable vessel to refloat or it may be necessary to lighten the ship. During this time the vessel must be protected and prevented from moving further inshore.

If the ship grounds and we have established that the hull is undamaged, we may try to refloat by coming astern on the engines. The attempt should only be for a limited period as the wash could bank up sand against the hull and worsen the situation. Before using the engines confirm that the cooling system is using the high level intakes. If this action is unsuccessful or inappropriate we must devise a refloating plan.

Discharging ballast, without passing a line to a tug, or the use of a ground tackle, may cause the vessel to be driven further ashore or slewing broadside on. When on a lee shore lightening should only take place under controlled conditions when the ship can be held against wind and current.

As master, you should bear in mind that, when large loaded cargo carriers are underway, their momentum is such that, even when grounding at slow speed they can very rarely be refloated using tugs power alone. Large cargo carriers have been known to ground so lightly that the ship's crew did not notice the ship was aground and yet the casualty still resulted in a ground reaction of several thousands tonnes.

The  ground reaction is indicative of the amount of pull needed to free the casualty and as such it is clear that tugs alone will rarely be powerful enough to re float this type of vessel.

However on rare occasions a ship may ground near the time of low water, so that as the tide rises, the ship would float free. In such circumstances, provided we have established that the hull is undamaged, all that is needed is a tug if available, or ballast is taken to hold ship in position until re floating takes place.

Soundings will be taken all around the ship to find what part is aground, the present draught and where the deepest water lies. Find the time and height of the next high water and if appropriate the next spring tide to see if the tidal range is sufficient to re float the vessel.

In deciding what ballast/ cargo to remove to regain lost buoyancy due regard should be made of the stability loss caused by removing weights low down on a ship already adversely affected by the grounding and the possibility of free surface effect.
If the lightening operation and the rise of tide is not enough to re float the vessel, other methods such as tugs or tug & ground tackle will be needed to overcome the remaining lost buoyancy or remaining ground reaction.

When ever a ship is stranded or aground, the seabed is exerting an upward force on the hull (i.e) some of the weight of the ship is resting on the seabed. This is known as ground reaction and must be overcome before the ship can be refloated. The ground reaction is a measure of the change in displacements between the pre‑stranded and stranded mean draughts.
The pull or force needed to free a stranded ship depends on the remaining ground reaction (remaining lost buoyancy) and coefficient of friction of the sea bed.

This is used both to hold the ship in position until conditions are suitable for re floating and also provide, in conjunction with tugs, the pull power needed to heave the vessel into deeper water. The equipment consist of wires, chains, pulley/ ground tackle and high holding power in anchors. Nowadays­ these all will be provided by the salvage company.

Unlike a tug, when using a ground tackle a constant tension will be maintained throughout the operation so that there is no delay in the initial, all important movement. Standard beach gear for re floating (i.e.) anchors and cables rigged on board the causality is still routinely used in salvage operations in the Far East, but is becoming a rarity in Europe, where high powered tugs, or salvage craft are available equipped with varied gear to enable them to carry out the differing tasks encountered.

Salvage companies use various equipment to make a channel between the ship and deep water, deepen the water surrounding the ship and sometimes remove sand or silt from under it. The methods and type of equipment vary:
Mechanical diggers & mobile dredging machines are used to secure a vessel from being driven further aground or slewing broadside on to the beach. They are also widely used for dredging before refloating.
Scouring is often carried out by small craft,( e.g.) a tug with her propeller well immersed is secured to the ship in a position such that her propeller wash scours sand, soft mud & shingle from beneath or alongside the ship.

Air lift, gravel or sand pumps can be used to remove cargo from a flooded hold or withdraw silt from around the ship.